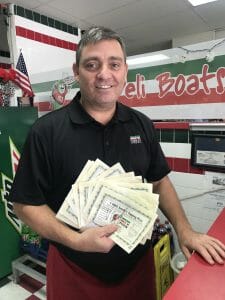 food product and revenue losses suffered by countless local restaurant owners in Florida. Power outages shut down restaurants all over town for a week or longer following the storm, costing restaurant owners, and their employees, tens of thousands of dollars.

This inspired Michael Plummer Jr., CEO of Our Town America – a national New Mover Marketing company headquartered in Clearwater – to host a Hurricane Irma Facebook fundraiser that raised more than $2000 ($1500 in the Bay area), all raised by their very own corporate employees and franchisees.

Plummer is donating the money equally (roughly $500 for each) to four Florida businesses who need a post-hurricane boost – Jets Pizza in Dunedin, Brix 33 and Ice Cream Palace in New Port Richey, and Great Clips in Fort Myers – after losing a combined $40,000+ in spoiled food and potential revenues.

Our Town America's Tampa-area franchise owners, Mike, and Julie Fisher, matched the raised amount Jet’s Pizza received, as they know the struggles owner Jim O'Connor and his employees went through as a result of hurricane.  Here's the catch - O'Connor, is giving the full amount to his employees.

On Halloween, Our Town America gave O'Connor his check at the local Jet's restaurant (located at 1350 Main Street, Dunedin Florida 34698).

Watch video below for full story.