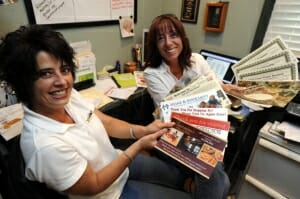 Six years ago, sisters Heather Wahl and Jess Damiani were both unemployed and wondering how they'd make ends meet for themselves and their children.

Today, Wahl and Damiani are supporting their families — while helping new families get acquainted with their communities.

Wahl and Damiani are franchisees with Our Town America, a nationwide company that connects local businesses with new residents in their communities through direct mailings of gift certificates and free product offers from local companies.

"It takes the trauma out of moving into your new home," said Damiani. "It's a vehicle for mom-and-pop stores to reach out to their local community. It's also a vehicle for national companies to have that small-town feel."

The sisters have been so successful — they've been top franchisees for the past three years — that CEO Michael Plummer surprised them during the company's national convention by giving them a new territory, for free.

Wahl, who lives in Warrington, was the first to discover Our Town America. After losing her job in commercial construction, she started a vending company and was looking to buy routes when she stumbled upon the company.

"I went over to Jessica's and said 'Hey, what do you think about this?' She was like, 'OK.' It was that simple," Wahl said. "It fit into our lifestyle, the flexibility of it, being able to make our own hours. It wasn't a big investment. There was no overhead, no brick-and-mortar storefront. It couldn't have been better for us."

They scraped together the money to buy franchise territories surrounding their own neighborhoods. They scheduled visits with businesses around their children's schedules.

"It was easy for us to pick the kids up, drop them off at school, go on field trips," said Damiani, who lives in Lower Providence. "We were still very close to home. As we became more successful, we expanded that (territory)."

Today, their territory includes all of Bucks County and parts of Montgomery, Chester and Delaware counties and parts of New Jersey. About three years ago, the sisters hired an assistant who makes cold calls to local businesses and schedules their one-on-one appointments.

But it wasn't always so easy. A few times, they were tempted to give up on the business, Wahl said.

"My skill sets weren't built yet," Damiani said. "I didn't have the experience under my belt. I don't think I had found my groove."

But the sisters kept at it, driven by their desire to succeed and a healthy dose of competition.

"It was hard," Damiani said. "And it was scary. But once we got our feet wet and saw we could do this, we really took off."

Wahl, 42, and Damiani, 43, said being in business together has strengthened their relationship and allowed them to be there for their kids, who range in age from 9 to 13 years old.

"It's giving me a lot of freedom to be the mom that I would want to be for my kid," Wahl said. "I ran the book fair at her school. I volunteered every Monday when she was in third and fourth grade. It's allowed me to give the appearance of a stay-at-home mom for my daughter but also work. There's no amount of money that can replace that. And financially, we're doing well. People ask me, 'How good can that be?' It supports two families. You tell me."